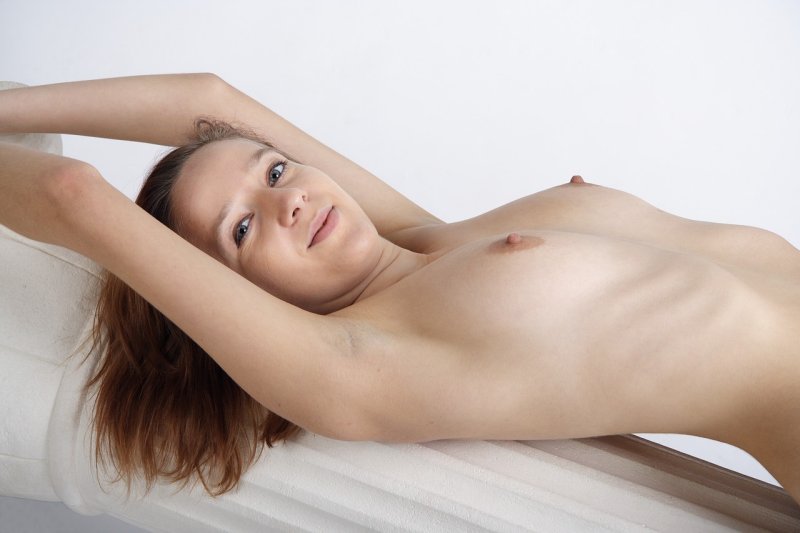 Tara looked in the mirror and admired her slim tan body. 5’7″ tall, 115 lbs., blonde hair, blue eyes, and not a blemish to be found! What was drawing here stare, however, was her chest. No, it wasn’t big by any means, a 34b cup to be exact, nor was it her stunningly beautiful pink nipples. It was really her areolas, which were larger and puffier than any she had ever seen! They were much too large for breasts of her size, but that only seemed to make them look even sexier! It seemed to Tara that a lot of her sexuality was wrapped up in her areolas and nipples, and as they were in a constant state of sexual excitement, it wasn’t unusual for Tara to have her tits sucked at least two or three times a day, and since she didn’t want to get the reputation of being a slut, she usually had her trusted girlfriends take care of her nursing requirements! Tara glanced at the clock on her nightstand and frowned. “Kimber should be here by now,” she thought, “it’s almost seven-fifteen, and that doesn’t leave much time to get ready for school!” Just then the bedroom door flew open and an apologetic Kimber bounced into the room. “Sorry I’m late,” she gushed, “I had to drop my brother off at the sitter!” “Well hurry up,” urged Tara, “we don’t have much time!” “Okay, okay, give me a break, will ya,” Kimber snapped, “I didn’t do it on purpose!!!” Tara realized that arguing would get her nowhere, so instead she walked over to Kim and lifted her chest to her school mate. “My my,” Kimber cooed, “our two little darlings look like they need some attention!” An instant later, one of Tara’s hot nipples was safely in the hungry mouth of the eighteen-year-old suckstress. “She may be a hoot,” Tara thought, “but she’s one of the best tit suckers she had ever had!” Deftly moving from one nipple to the other, Kim expertly sucked and licked the oversized nipples, finally bringing Tara to a nice easy orgasm. “I wish you could show me how to do that,” offered Kimber! “And what would that be,” questioned Tara? “Oh, you know what I mean,” laughed Kimber, “being able to cum without touching your clit!!!” “That, my dear,” retorted Tara, “is not something you can teach!” “Come on,” replied Kimber, “let’s get to school!”

The first three periods went quickly enough, with nothing unusual happening, so Tara was glad that her next period would offer a little diversity to an otherwise dull day. Gym wasn’t usually a class that a senior girl elected to take, as it wasn’t a senior requirement, but for Tara, it offered a perfect opportunity to get her tits sucked! During the first week of gym class, Tara had sized up everyone in her group and decided that Mona, a cute little redhead would do nicely as her fourth-period tit sucker. When she finally maneuvered the young girl into a hidden corner of the locker room, she found a very willing and pliable accomplice! Mona was fairly attractive, but was not very popular with her classmates, so when Tara, a beautiful senior, showed and interest in her, well, she was more than happy to do just about anything Tara asked! By now they had a routine that never varied, both girls would change into their gym clothes, and then slip to the rear of the locker room that was out of sight from the rest of the room. There, Mona would lift Tara’s shirt, unhook the front opening bra, and then gently suck her ripe breasts while giving herself an unbelievable thrill when she brought Tara to her orgasm, and on several occasions, she slipped her hand inside her own shorts and diddled herself to her own climax. After Tara had her cum, both girls would straighten up and then hit the gym, meeting again after class in the shower room. Tara’s high school had a communal shower, so all of the girls showered together in one large room, and more than once, envious classmates would come over to Tara and offered to soap her unique breasts. Having slippery fingers gliding all over her chest was usually enough to make Tara have another, if weak orgasm, and although no one ever said anything, it was pretty much common knowledge that Tara’s chest needed a lot of attention and for that reason alone, most of the girls were more than happy to give a helping hand!

Although she sometimes got a suck job during lunch, since she usually was still satisfied after gym, Tara usually just ate her lunch and gossiped with Kimber about the usual girl stuff. It wasn’t until the end of sixth period that Tara began thinking about getting her tits licked. She was lucky in two ways, because seventh period was study hall, and she could get a pass and get out if she needed to and the other good thing was that she had somewhere to go, and that would be Miss Linder’s room! She was a fiftyish literature teacher who had never married, and whom Tara sensed right away was probably a lesbian. You might call Miss Linder… a handsome woman, attractive in a harsh sort of way, built sturdy, with strong legs and a huge chest. Her hair was always pulled back in a bun, and she wore heavy black-rimmed reading glasses, in other words, your typical Norman Rockwell English teacher! At exactly five minutes past three, Tara entered Miss Linder’s room and locked the door. The teacher was sitting at her desk grading papers and didn’t even look up when Tara moved over next to her desk, and while continuing to grade her papers, she asked in a stern voice, “Is my little one in great need today?” “Yes ma’am,” came Tara’s soft reply, “I need it badly!” Finally looking up, Miss Linder leaned back and said, “Expose yourself to me, child, show me your lovely young body!” In this case, if Tara wanted her tits sucked, she would have to remove all of her clothing as Miss Linder loved seeing the young girl naked, and always spent some of her time sucking Tara’s ripe vagina. Tara had to admit that even though she loved getting her nipples sucked, Miss Linder was an excellent cunt lapper and always made her have incredibly hard orgasms! Also, this was not a one-way proposition, as Tara had to return the favor by sucking on Miss Linder’s big hairy bush, but this didn’t really bother Tara either as she knew that she was probably bi anyway, so what was the harm!

Tara sat down on the desk in front of Miss Linder, spreading her legs, while showing off her body just like the older woman liked her to. At last, leaning forward in her chair, Miss Linder asked, “Does baby want mama to suck on her cherries?” Before Tara could answer, Miss Linder took a ripe nipple into her mouth and sucked on it fervently inducing Tara into making a contented sigh, while gently cradling the older woman’s head in her arms. The old cunt could really suck a tit, and soon Tara’s vagina was leaking juice all over the top of the desk. Sensing that the young girl was getting close to her orgasm, Miss Linder dropped away from Tata’s chest and buried her face into her smooth pussy while her probing tongue quickly found Tara’s erect little clit, flicking at it harshly, making Tara jerk with each connection. Tara cupped her breasts and twisted her pink nipples while she stared down at the woman eating her hot young slit. Her head began to spin out of control as the lust in her clit spread like fire all over her body and a loud groan signaled that the first orgasmic contraction was ripping through her dripping pussy. Over and over again her cunt muscles squeezed together, each time resulting in another orgasm. When it was over, Miss Linder’s face was glistening with the sticky juice that had erupted with Tara’s climax.

Since time was of the essence, Tara hopped off the desk and quickly put on her clothes as she didn’t want to be totally naked any longer than was necessary, just in case someone would happen by and want in. When she was all ready, Miss Linder had taken her place on the desk, with her legs spread wide, and her panties off while Tara sat down in the chair and scooted up so that she could easily reach the teacher’s vagina with her mouth. Miss Linder was breathing hard, obviously turned on by the tonguing she had just given Tara, so teasing her by just kissing the inside of her thighs, Tara waited until Miss Linder forcefully grabbed her by the hair and pulled her mouth to her vagina, causing Tara to chuckle, and then bury her tongue deep into the hairy honey pot! Once Tara asked Miss Linder why she kept her bush so furry, and she said that she had a friend who liked it that way. It didn’t really bother Tara one way or the other, but she had to admit that Miss Linder had the hairiest pussy she had ever seen, but just like all woman, however, Miss Linder had a very sensitive clit that didn’t take much licking to bring her to orgasm, especially since she had just spent the last ten minutes with her mouth on Tara’s vagina! Now it was Tara’s turn to get her face covered with pussy juice and the old woman seemed to have an inexhaustible supply of the sweet liquid, and every day she tried to drown Tara in it! Tara really had to get back to study hall, so she bored in on the “little man in the boat”, and brought Miss Linder to a shuddering climax! It was the same every time they finished, Miss Linder sitting back down in her chair and acting as if nothing had happened, while Tara thanked her for her help and left the room and went back to study hall.

On her way through the halls, Tara’s thoughts turned to her large nipples as her boobs bounced when she walked, and by the time she reached the study hall she was already planning on how she would get them sucked later that night. She knew she was addicted, but if you had to be addicted to something, well, it couldn’t be any better than this!!!