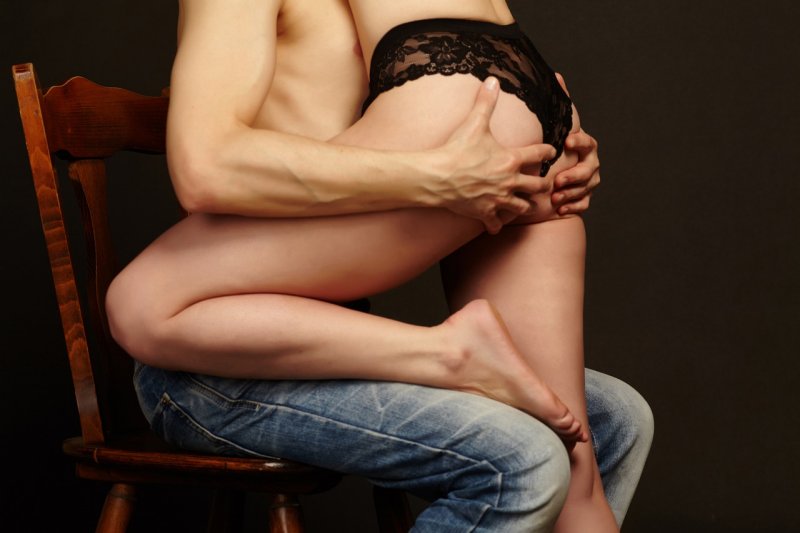 Robert had taken the wine glass from her and led her to the couch. Gently undressing her he had pulled her close to him. She could feel his warmth surrounding her as Terrie held him tight as the fireplace flickered in the background. Robert kissed her deep. He loved the taste of her tongue rolling around in his mouth. He relished the warmth of her tanned body and it’s sweet smell. He loved the fact that she had no tan lines anywhere.

God how he loved looking for them though. He felt Terrie’s warm embrace. It was like warm rays from the sun that engulfed his soul. He held her tight around the small of her back as he entered her. He grabbed her ass and squeezed it to devour it in his feast. As Robert went deep into her Terrie arched back in ecstasy receiving his full length. She felt his power and strength draining into her body. His fair skin gave him the look of an angel hovering over her. He had given himself to her totally. Then she grabbed him tight and held him deep inside her as she exploded with desire. She held him tight for deep inside he held her heart.

Terrie woke and could tell she had cried during her sleep. She wiped her eyes dry, trying to forget her feeling from the dream. Kristine peeked in her room. Terrie, have you been crying? I am okay, she replied sniffling. Terrie looked at her, It was just a dream, she said. It was about this guy I met a few nights ago. I seem attracted to him. Why would he pay for a girlfriend when he can have anybody he wants to date? You can’t afford to fall for a guy in our line of work. Terrie looked at the floor. I don’t know but I really feel bad when I fuck him. Why do you feel bad? Hell Kristine, I have been through so much and he is just a normal guy.

When I have sex with him I feel like I am corrupting him. Kristine turned to look at her. Terrie honey, He pays you damn good money to corrupt him. If it were me I would keep him well corrupted. Terrie looked up to her with a smirk on her face. Then she got a sad look. But you don’t feel like I do about him. Terrie began hurting inside. What man would ever want her anyway? She was a low life. She felt like a piece of meat for sale. She could not hold back her tears. Part of the pain of her job was knowing the things she had done that were just plain bad. In the hearts of many, there was no forgiveness for her past. Kristine handed her a Kleenex to dry her eyes. Kristine rubbed her back. It’s ok honey I know just how you feel. As they hugged Terrie’s tears trickled on her friend’s shoulder. Then within a wave of emotion, she sobbed bitterly for several minutes to the point of relief. Feeling the pain had gone for now she dried her eyes.

Robert had opened his eyes with the biggest hard-on he had for days. His dream of Terrie was very intense. Well as some would say he went and pissed it off. When he pulled down his underwear he saw cum spots on them. They were still damp. Then he thought. Son of a bitch. I had a wet dream. The dream was vivid in his mind. He remembered Terrie devouring him as exploded. He saw her arched back as he had buried himself inside her tanned body. The one thing he could not forget about Terrie is every time he looks at her he gets lost in those blue eyes. And he could stay there forever. Before him sat a pile of work on the desk in front of him. A couple of hours had past and he had been working on an account that a financial manager had screwed up. He ran his hand across his pocket and he felt something. He reached in his pocket and pulled out a small blue paper flower. A memory flashed across his mind. It was Terrie. The very first time he saw her just over a week ago. She looked more beautiful than any girl he had ever seen before. She was just standing there in front of the playhouse waiting on her escort. Then just before she got in the car she stopped and looked right at him as if she had seen the best-looking guy in the world. Terrie must have stared at him for thirty seconds. Then someone got her attention and she got in the car. He could not forget her intoxicating beauty.

The buzzer went off in front of him bringing him back to reality. It was his friend Jean. Jean was like a sister to him. They knew everything about each other since they were little kids. She saw him behind his desk just staring into space. Jean sat there for a few minutes just watching him. Then she spoke. Hello, Eddy. Earth to Eddy. Come in. He shook his head and apologized to her. Playing with his pen in his hand he began to tell Jean about Terrie. He told her the whole story. Jean looked at him. Eddy you thinking with the wrong head here. OK, I know that a relationship with her will probably never work out. But if she will let me I want to help her. Jean sighed. I get it you are going to save her from herself, right? Eddy, she is a hooker. Eddy frowned and said, no only she can save herself. But at least I can give that chance. Please don’t call her that. Okay, I will help you any way I can. I will give my full support. Jean knew that look in his eye. And she knew no one could change his mind except Terrie.

Terrie stood on the street corner waiting for her next trick. Somehow it all seemed harder than it used to be with a strange man. But she knew if she kept busy she could ignore her troubles. She had several clients that day. It had been a long day for her. She looked in the distance and saw a car. She could not tell what kind it was. She laughed. She could not believe a client stood her up. That had never happened. She called Kristine to pick her up. She really just wanted to go home. Tomorrow was Friday and she hoped a better day was ahead. It was the night she would see Robert again. She got home and took a long soothing bath. Wrapped in her towel she walked into the living room as the phone rang. It was Robert. How much will it cost if I just want to talk to you and not have any sex? She giggled with a cracked voice. Well, I am willing to negotiate. OK. My place the same time as last week Terrie hung up the phone smiling. For some reason just talking to him made her feel good.

Terrie knocked on Robert’s door. It was a crisp cool evening. The door opened and she disappeared inside the door. Have a seat, Terrie. She set down and relaxed back into her chair. Laying her purse down beside she looks around the walls at the pictures. Pictures lined a bookcase of military services. She saw him in uniform. As she looked at the pictures a feeling of fear overwhelmed her as she saw the Police Academy sign at the bottom in one of the pictures. It’s OK Terrie I am not with the police department. Terrie jumped at the sound of his voice. What do you want? It’s OK. You are safe here. She relaxed again in her seat. Her white tee shirt and jeans fit her very well. I just wanted to talk to you. Do you ever get tired of your work? Terrie, you can’t like what you do. Hiding her feelings the best she could she told him. ÒI do all right. I get to meet lots of people. I visit really nice places too”. She looked at him and forced a smile. Robert, I don’t think you want to be my friend so let’s quit fooling ourselves OK? He sat down directly in front of her and took her hands. My friends call me Eddy. I would really like for you to also. He gave a gentle soothing smile. She looked at him and smiled back. Ok, Eddy what do you want to talk about? I would love to help you find different work. I kind of thought you might be tired of your work by now. She looked at him and laughed. You wanna help me? She sighed and said don’t try to save me, Eddy. Spend your time and effort on someone worth saving. I have nothing left to save. She showed her sadness to him. Sometimes when you do things wrong, you spend the rest of your life paying for the mistakes you make. I don’t believe you. If you lose the ability to love or care about someone, then you have nothing left to save. If you lose your compassion, then you have nothing left to save. But I see a lot of compassion from where I am sitting. I think you care about people as a whole. Terrie, you are not very happy with your job now. Unless someone helps you, you will have nothing left to save. Tears suddenly fell from her face. She hugged him. For the first time in her life, she felt like a human being. Somebody treated her with respect and decency. Terrie held him tight like a person would hold on to they’re the greatest treasure.